150 YEARS AT THE INTERSECTION 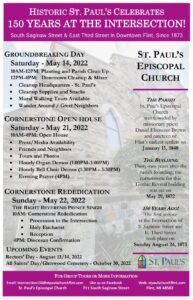 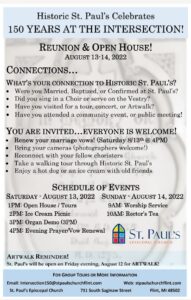 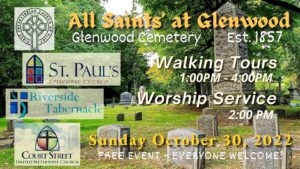 COMMEMORATING 150 YEARS.  JOIN US FOR THIS 15 MONTH CELEBRATION.

Flint, MI, April 8, 2022—Historic St. Paul’s Episcopal Church has worshiped at the intersection of South Saginaw Street and East Third Street in downtown Flint, for almost 150 years! Ground was first broken on May 9, 1872, the cornerstone was set 20 days later, and construction of the Gordon W. Lloyd design was completed 15 months later, with the first service held in the ‘new’ church on August 24, 1873.

Throughout 2022 and 2023, the parish will host a 15 month ‘season of celebration’, anchored in a series of community-based events to commemorate not only important milestones in the life and history of the parish, but to highlight the contributions of the families whose work has sustained the parish since its founding in 1840.

Senior Warden Barbara Mannor stated, “The 150th anniversary of this magnificent structure is a natural time to reflect not only on the construction of a building, but on the organization of our town, its industries, institutions, clubs, and civic functions. The celebration is really about relationships and collaboration, and the role of St. Paul’s families in building a community. It is about remembering and renewing relationships with old friends, and establishing new connections for our next 150 years in the community.”

Parish Archivist Walt Peake hopes “that the celebration will lead to new ideas about how the historic church can ‘open our doors, welcome our neighbors, share our gifts, and build a parish!’”

The scheduled events include a series six special weekends during the upcoming months. Each weekend will include Saturday open houses and special Sunday worship services, with most of the events conducted in collaboration with community partners whose history is inextricably linked with that of the parish.

The first of these will occur over the weekend of May 21-22, with a Saturday open house, pipe organ demonstrations, and historical/stained glass window tours (photographers welcome), and a reception. On Sunday, May 22, 2022 at 10AM, The Right Reverend Prince Singh, Bishop of the Diocese of Eastern and Western Michigan, will preside over the formal rededication of the cornerstone, reliving some of the events of 150 years earlier!

In August, the parish will commemorate the arrival of St. Paul’s first priest, the Reverend Daniel Ebenezer Brown. A parish reunion over the weekend of August 13/14th, will welcome former clergy, choir members, and parishioners to take part in the celebration. Outreach efforts are underway to identify and invite anyone with any earlier connections to the church. Were you married or baptized at St. Paul’s?  St. Paul’s Priest-in-Charge, The Reverend Dr. Don Davidson observed.

The third and final event on the 2022 calendar will be an ecumenical, All Saints’ Day remembrance at Glenwood Cemetery, founded in 1857 with leadership by early St. Paul’s families. Glenwood is the final resting place for many of St. Paul’s earliest families, including that of our first priest, Daniel Ebenezer Brown. The Glenwood All Saints’ Day event is a group effort, made possible through the collaboration of the Glenwood Board of Directors and a number of local churches.

Established in 1817, the village that eventually became Flint was a thriving settlement where logging flourished. In 1839, the Reverend Daniel Brown came to Detroit to shepherd a congregation of worshippers in a small wooden tabernacle, the first Episcopal Church. As Flint blossomed, so did the congregation. Many of Flint’s early influencers were included in St. Paul’s faith community.

Our current building, on Saginaw Street in the heart of downtown Flint, was built in 1872 by renowned gothic church architect Gordon Lloyd. Stones for the new building were brought on sledges drawn over the ice of the Flint River.

From 2015 to 2021, the Reverend Dan Scheid worked with us to realize the dream of God with our wisdom of our past and our imagination for the future.  Dan was called in the spring of 2021 to serve at All Saints’ Parish in San Francisco.

Since September of 2021, St. Paul’s has been blessed with the leadership of Father Don Davidson, serving on an interim basis as the Priest-in-Charge.  He will guide us as we go through the discernment process that will lead us to a new rector in the coming months.

WE OPEN OUR DOORS,

WE WELCOME OUR NEIGHBORS,

Services every Sunday at 10:00 AM In Person and Live Streamed on Facebook

Services on Wednesdays at 12:10 PM