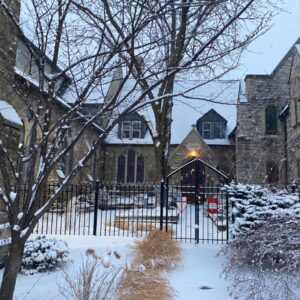 St. Paul’s is a rich, holy, and beautiful place to worship inside the church and with our community during the Christmas Season

St. Paul’s is part of a larger Episcopal community, and a member of the Episcopal Diocese of Eastern Michigan.

‘In the name of these refugees, let us help all refugees’ “The Christmas stories are reminders that this Jesus came to show us how to love as God loves. And one of the ways we love as God loves is to help those who are refugees, those who seek asylum from political tyranny, poverty, famine, or other hardship.” 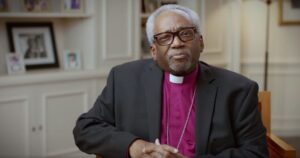 The Rt. Rev. Prince Singh, elected provisional bishop by the joint convention in October, offers a word of greeting and a reflection on the upcoming celebration ahead of his arrival to our dioceses in February.

Do you know your Advent Colors?
Advent is the season of preparation as we wait for the arrival of the Christ Child.  It is filled with many wonderful Church traditions including the Advent Wreath, The Jesse Tree, Greenery and rich colors including Green, Blue and Purple.
Purple was and is used in many churches as a symbol of the royalty of Jesus who came to us as a child of immigrant and homeless parents and yet was the King of all. We may be poor in resources or of spirit, but we are always rich in  our relationship with Jesus who loves us and knows us each by name. Blue or Sarum Blue is related to the love and sacrifice of a young woman named Mary.  When Mary was asked to serve she gave of herself in a truly marvelous way by  being the earthly mother of Jesus. The risk for her was great as she was not married during a time when such distinction meant societal pain. Yet, she put  aside her own wishes and said “YES” and changed the world. Blue symbolizes her love.

There are four colors involved distinctly with the Advent Wreath.  Purple reminds of royalty as Jesus was the King of Kings and Lord of Lords. The Rose (Pink) candle is lit on the third Sunday of Advent and it reminds of refreshment. Green wreaths adorn the Advent Wreath and other places in the church and they remind us of new birth. Blue or properly Sarum Blue reminds of Mary who, when asked if she would be the Mother of Jesus said Yes.

Now a question for you: Is the Advent Wreath a religious symbol? While it may be a symbol now and it is placed in honor in many churches of many denominations, its origin is not religious at all. The wreath with many candles was often seen in bars long before the spread of the Christian religion. The candles were lit until the winter solstice, or the time when the days began to get longer and there was more sunlight. A German Lutheran Pastor is credited with turning the secular symbol into a religious one by associating the tradition with Advent and the lighting of four candles, one each Sunday until Christmas Day. A fifth candle is sometimes added to the wreath and lit on Christmas. It is called the Christ Candle and reminds us of the birth of Jesus. 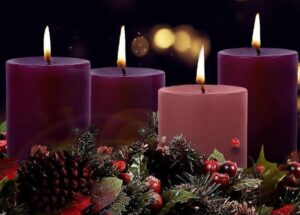 Christmas is approaching quickly and our Angel Tree outreach to children in  need is ready-to-go. Our Crossover partners provided us with the names, ages, and gift suggestions for 20 children, and all of them have been adopted. Each child received two gifts, one of  clothing and one of a toy, game or gift-card.

Our “Angel Tree” was set up in the church  parlor beginning Sunday, November 14, where each child’s name was placed on a special ornament.  The gifts and ornaments were then delivered to Crossover in mid-December and distributed to the children with their gifts for the season.

WE OPEN OUR DOORS,

WE WELCOME OUR NEIGHBORS,

Services every Sunday at 9:00 AM In Person and Live Streamed

Services on Wednesdays at 12:10 PM